Vice’s article about Australian photographer Murray Fredericks is right when it says he ‘intends to document the lake not just as a landscape, but as a medium in itself.’ The images they’ve picked out to accompany the interview are surreal and entirely beautiful things. I’ve seen the salt lakes in Bolivia, and well remember how they break your senses of distance and perspective. They are weird places, that challenge our assumptions about how we relate to space.

Where it misses a beat, however, is where it focuses on mirrors as signifiers only of vanity:

Our generation may not be as overtly savage as the queen, but we are arguably equally transfixed by our reflections. Social media is the ruler of our kingdom, and our filtered selfie camera is our magic mirror. We may not be killing our opponents, but many of us feel compelled to make sure our mug gets more “likes” than theirs.

Maybe it’s true. It probably is. It’s not the interesting thing about mirrors though. The symbology risks overtaking the artefact.

For me, the far more interesting thing is how they break space apart. Put two opposite each other and you create infinity. Put one in a room and strange things start to happen.

Vanity is an obvious, and topical reading. But I’ll always be fascinated by the fracture the reflection sits in.

I’ve been thinking about cities, how they’re always in motion. The city never sleeps, its arteries clog, its lungs fill with smoke. But that only describes how we use the space. Meanwhile, it regenerates.

Museum Street, where You Me Bum Bum Train once lived.

New towers in the City 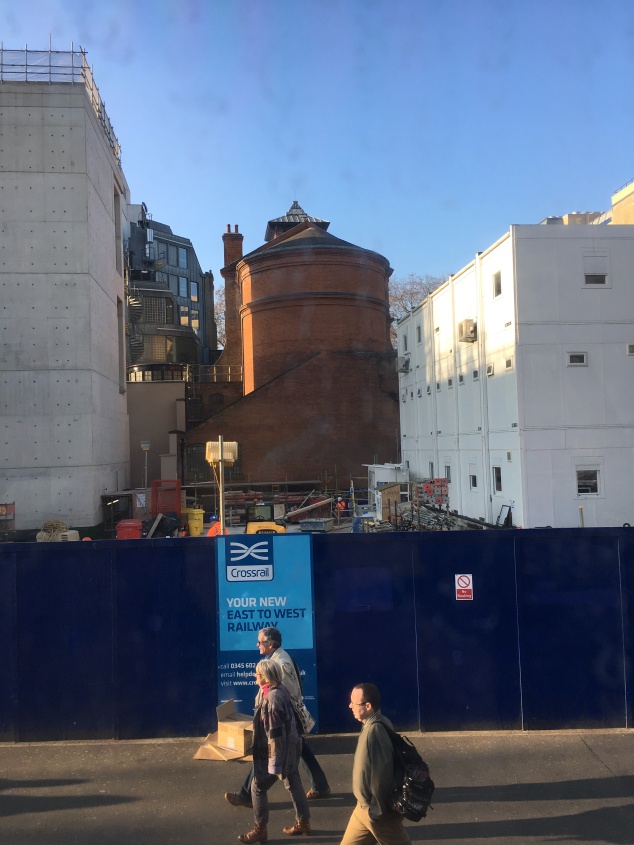 The three faces of London: Historic, developing and transitory

The City, in predatory guise 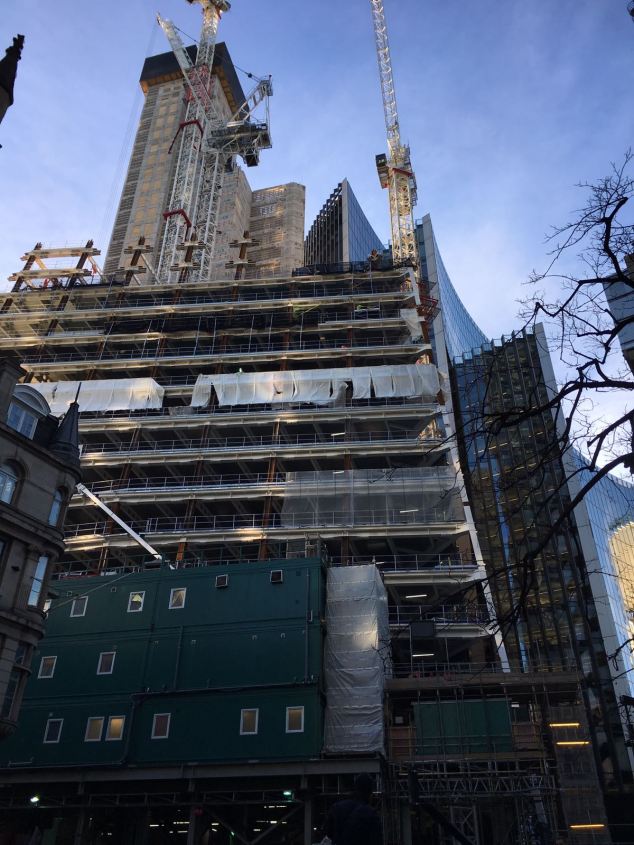 The crest of the wave

This might just be perfect. This kid is my new hero.

Ever wondered what people look like covered in honey? Me too, don’t worry. Good news though, because a photographer called Blake Little has done just that to people in his series, Preservation.

The photos record living statues, people carved out of amber, and are utterly hypnotic. Ranging from the serene to the defiant, natural to artificial, they do what the best portraits do – show us a most intimate and unexpected side of the subject.

There are some sites out there that do more than archive beautiful or interesting photographs. Sometimes they collect sets which tell us something more. middle + off is one such example, and it focuses on synchronicity of form.

I’m going to let this one speak for itself.

Go tell it on the mountain

Prepare for the most delicious weirdhole you’ve tasted in quite some time. Take a wiki, add a good if not necessarily totally original idea, and then ram endless fistfuls of ingenuity down its gullet until it becomes original again.

I give you The SCP Foundation. Essentially, this can be described as an online catalogue of Area 51 / Warehouse 13 / that warehouse from the Indiana Jones movies and the like. However, clearly when starting this off the creators had a conversation that started, ‘How can we make sure it’s nothing like those things?’

The answer? You make every entry a truly surreal subversion of everything from the mundane to the monstrous. There’s no obligation for each thing to be terrible and demonic, in fact most of them are simply incomprehensible.

I don’t think I can really do it justice and I’ve only started dipping into it myself. So rather than do it a disservice, here are some selected highlights:

The care taken on the taxonomy, processes and semantics  pays off. There’s a real sense of clarity and purpose, this wasn’t just some people goofing about (although they do have joke entries, including SCP-095-J for fans of Comic Sans).

It’s utterly commendable, frequently baffling, regularly sinister and exactly the kind of thing that I wish I’d set up.

I love Twitter. Aside from the process for disconnecting from vacillating twerps being ‘Unfollow’ it also gives me so many amazing things that otherwise I would have missed. One of those is Joseph Pierce.

The below short is a fine example of rotoscoping. For those unfamiliar with the technique the simple summary is ‘Film stuff, draw over film, fiddle about with reality to make new quasi-real animation’. It’s been responsible for A Scanner Darkly, the only filmic example of a Philip K. Dick story that manages to recreate some of what’s so bloody terrifying about his work. And yes, I am including Blade Runner here. Quit grumbling, it’s sloooooooow.

Anyway, The Pub. It’s a simple premise – a migrant worker faces up to mortality and the everyday alienation and unpleasantness of life and people. My god, people… This is a strange, threatening and far too familiar vision of the world. Watch this, and if you can face it then watch A Family Portrait and Stand Up. I won’t blame you if you take a break between them though.

Also, I know someone who works in the film industry and he told me that Mr Pierce is a nice guy as well. That makes it even better.

The Pub from Joseph Pierce on Vimeo.

My Christmas discovery for 2012 is something that has bought me great joy. Like endless shiny packages of great joy, each individually wrapped by a different talented person and containing those sour, bitter-sweet lumps of raw meat which ooze word-juice, flambéed in 100% proof narrative before being coated in the crumbs of your expectations and deep-fried in the realisation that yes, there are actually over 260 more of them to come. I am, naturally, talking about Drabblecast, but you already knew that didn’t you. Clever little monkey.

Having been sent there by a (modestly done) nod towards her own work I found myself listening to Go Beep by Aliya Whiteley. I was expecting an interesting story, based on precedent, but imagine my joy at hearing the rest of it. Norm Sherman is one of a very rare breed, an America who is deadpan, erudite, frequently surreal and excellently cutting. He’s definitely not racist either (see ep. 262).

For example: “Another Halloween special. Another night sitting around eating candy straight from the bag and ignoring the goddamn doorbell. Just another tradition I like to call ‘Fuck you, I paid for it’.” Which is followed by a great debunking of costumes, Teenage Mutant Ninja Turtles and skanks and a Lovecraftian take on the 12 Days of Christmas (My True Lovecraft Gave to Me by Eric Lis)

I could list more but that would take the fun out of discovering them yourself. For those who are a little ashamed of giggling on public transport, maybe listen to it at home. I’ll leave you with the strongest recommendation in my arsenal (yup, the blue one with the ribbon on) to check it out though. A couple of good starters though:

We hear much of visions and I trust we shall continue to have visions and dream dreams of a fairer future for the race. But visions are one thing and visionaries are another, and the mechanical appliances of the rhetorician designed to give a picture of a present which does not exist and of a future which no man can predict are as unreal and shortlived as the steam or canvas clouds, the angels suspended on wires and the artificial lights of the stage. They pass with the moment of effect and are shabby and tawdry in the daylight. Let us at least be real.

Interestingly, this was part of a speech made in US Congress against Woodrow Wilson’s proposition of the League of Nations. Lodge’s reservations about handing over power to international influences were later codified in the Security Council vetoes granted to the major powers of the UN. I guess time will tell if this was ‘A Good Thing’.

Wilson embarked on a speaking tour of the US in support of the Treaty, which was defeated by a few votes, and this turned out to be his undoing. He collapsed a month after this speech in Colorado and on his subsequent return to the White House suffered the massive stroke that ended his active presidency.

This is one of those really simple ideas with the irreducible nugget of truth and a dash of wit in the writing. And once you’ve looked you’ll start seeing them everywhere.